Shopping Cart
Your Cart is Empty
Quantity:
Subtotal
Taxes
Shipping
Total
There was an error with PayPalClick here to try again

Thank you for your business!You should be receiving an order confirmation from Paypal shortly.Exit Shopping Cart

The Resolution of UNPO For Cham and Arvanites 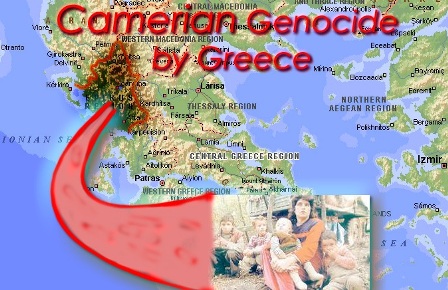 The Cham and Arvanites people are autochthonous people of Albanian ethnicity in the territory of Chameria. Albanian is their native language; their national history is related to their territory and identity since the ancient times as Epirotes and Molos Illyrian tribes were stretched into the Pelasgian territory and lived as Pelasgians and neighbors with the Thracians of Thrace. The people of Chameria have a unique language, culture, tradition, ethnicity and race that distinguish them from the Greeks. The folk costumes, music, dance, culture and traditions are particular and unique to these people. In 1913, the area of Chameria was a territory located in southern Albania and northwestern Greece traditionally associated with an Albanian speaking population called Chams, which came under Greek control and as such were separated from their motherland, Albania. Cham Albanians were given no minority status and they have been discriminated ever since. Muslim Chams were considered a religious minority; as such, some of them were transferred to Turkey during the 1923 population exchange, while their property was alienated by the Greek government, this being a term of the Turkish-Greek peace agreement. Orthodox Cham Albanians were considered to be Greeks and their Albanian language and heritage were and still are under pressure of assimilation. When Chams were expelled in 1944, the citizenship of 1,930 Cham Albanians was removed and afterwards they were sentenced to death. The rest, which formed the majority, lost their citizenship under a special law of 1947. Orthodox Chams remained in Greece and retained Greek citizenship, but without any minority rights. The main issue is that Muslim Chams have demanded the restoration of Greek citizenship whilst retaining the citizenship of the country in which they currently reside and the recognition of the status of minority. The restoration of their properties is another main issue. A major part of them would not accept financial compensation only as according to most Chams, money is not as important as their citizenship. The Greek government considers the Cham issue to be a closed chapter. According to the Greek official position, Cham Albanians will not be allowed to return to Greece. The Cham issue cannot be ignored anymore due to growing pressure from Cham organizations and sympathizers within the Albanian Community in diaspora. These circumstances led the representatives 2 of Cham population toward the declaration of Chameria as a state in confederation with Greece as a transit phase until full independence is reached. Upon the proclamation of the Republic of Chameria, the Greek state responded with the expelling of Albanian workers from Greece by the police (the so-called Broom Operation). Recently, Greece has started moving their army troops to Cham territories located in Albania. Information from our military officers in Chameria reveals a classical deployment of Greek military units in the guise of military training. Currently, there are approximately two million Cham Albanians in Greece and as such, the government of Chameria requires the Security Council to protect them. On 29 September 2016, the Enlargement Commissioner of the European Union, Johannes Hahn, mentioned the Cham issue as an existing unresolved issue between Albania and Greece, alongside other matters that the two countries need to resolve. This statement was opposed and criticized by the Greek Foreign Minister, Nikos Kotzias, who asked the Commissioner to withdraw and correct his declaration. Therefore, we, the UNPO General Assembly, Based on the preamble of the Charter of the United Nations and at the first chapter, signed on 26 June 1945 in San Francisco, and entered into implementation on 24 October 1945, based we request and we are waiting from the UNPO to represent and push and fulfill our human, political and cultural rights deriving from the international treaties on freedom and human rights and to the principles of self-determination of the people. Based to chapter I st request:

1. The right of Cams and Arvanites to declare their ethnicity, Based to chapter VIth, VIIth request:

2. The return of the Cham and Arvanite population to the territories inherited from where they are expelled under the Greco-Turkish agreement of 30 January 1923. Based on Chapter XIth , XIIth , we request:

3. The right to use the Albanian language as their official language Based on Chapter XIth , XIIth , we request:

4. The right to the property connoisseurs of Cham and Arvanitas confiscated by the Greek Government based at the law on 1953-1954. Based on Chapter XIth , XIIth , we request:

5. The right to free exercise and the mother tongue of culture and religion, religious objects of cults in the territory of Chameria. Based on Chapter XIth , XIIth , XIIIth we request:

6. The right of the state and political organization of Cham and Arvanites in an independent state entity, under international guardianship.